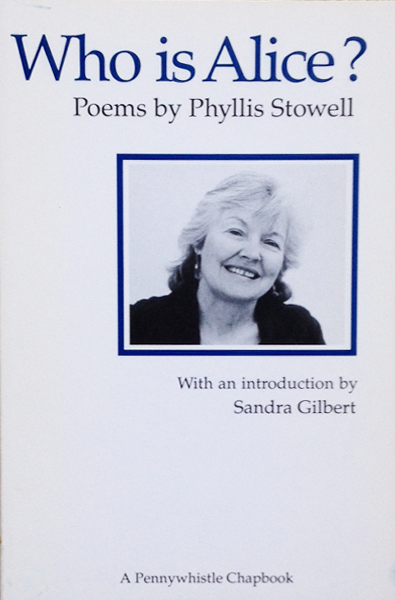 Of those with voices, many came;  some I quoted    or nearly quoted, writing as I heard them; others appeared in a line, a phrase, a word, and some arrived unannounced or spoke ensemble, to name her who could be Alice, aged 6, coloring an Out-Of-Space Lady with a bag of eggs and sticky   fingerless hands, coloring – later – in hard red    an armless faceless    twisted bean of a woman with no name

Her Body Was Pleasant-Like
and Foaming at the Mouth

Character is good when a man has courage, but in general
it is not appropriate for a woman to be brave and manly
or even alarming

Alice the virgin: if I could just burst out!
but born too soon, imagine
her and Minnie going about alone
on the omnibus, wherever they wanted to!
(or born too late, that privilege a brevity,
if it ever was
in cities where she hastens to her car
alarm in her hands, ferret-like

in Chahine’s “Cairo Station”
a cripple, sick with desire
lured the bride-to-be, a lusty lemonade peddler
to the warehouse where he’d hung
her stolen bucket on the latch of a crate where,
having gored her with a butcher knife,
he locked her in, moaning (no matter
she was the wrong woman)

in “Earth”
which according to a film critic
“links violence with gentleness”
her murder is incidental, the murderer’s lust
less sympathetic and the pretty youth
left floating among bloodied reeds
had no class, even the fellah
refused to bury her

Alice-in-transit wanted to go to the movies
wanted to hear Amichai
add his voice to a poem she’d hungered through:
it was night, she was alone,
she read in bed Life Studies