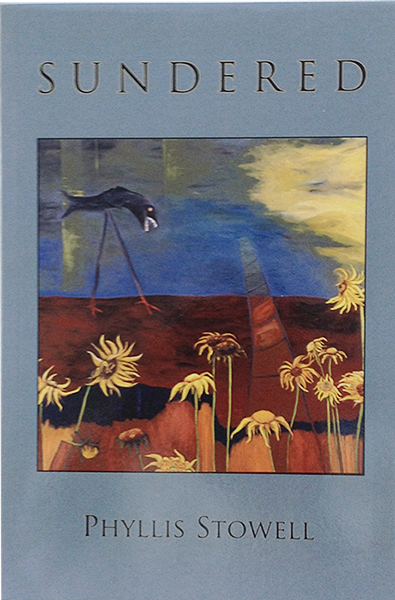 “This is not about what is true, merely true.”  Images of intrusion, aggression, martyrdom, achievement, pilgrimage move in and out of these poems as they move in and out of our dreams, their relation to lived life real but imponderable.  Phyllis Stowell’s writing seems to acquire a new clarity and strength of purpose, paradoxically, as it plunges into the mysterious.  For me this stands with Arc of Grief at the top of her work.

Watching the others in a cluster, excited, hurrying
toward a possible satisfactory
And staying behind, heading down a cobbled street

Knowing there is wind in the scene
Clouds overhead, reminiscent of menace
The bent reeds
To go apart To delete the life I led

Under prediction of storm, to mimic the gardener
shaping, deleting To engage in it
The less, and the less

To retreat to a white room
To inhabit emptiness
To put aside, like someone who has an appointment
The work a maulstick for the soul

A woman takes a whip to a woman
as in the Villa of Mysteries
– too many acquaintances, too many thinnesses

It’s what we’re used to, activity a banner waved from
cities of highrise over the hoop-la parade

Talking to a stranger about talking to myself
“What did the stranger say?”
That it does not mean, necessarily, loneliness
~

At night when hurrying in the indivisible
talking to the dark with its incurious eyes
I trip over a root of the hundred hundred years tree
Falling, I reach out my spread-open hand

“Go out and do something!”

Do and the word
will dissolve in fog-smudged rain

Fear Fear of
a meteorite obscured by clouds
falling toward us, helplessly
and no other world?

inversely proportional
to what I do

I row out
into gulfweed, calm
closes in

Death sat at my right side
like a grandmother
She had lost all her teeth, her gums bled
She could not remember the word
geranium – that red
made an artist weep, he would never paint
never again wonder at that color
Hours after she needed it
she remembered geranium
but there was nowhere to say it
She could not comprehend why it came
so uselessly, taunting her with a future
of opacities, as if she would not be allowed
to know herself
nor the soul, nor the subtle body

If, at the end, you do not make an immortal
subtle body

Next to me my love felt unwell
I reclined his seat, brushed his forehead
with my lips, his forehead cool and sweaty
In a hushed voice asked him
was he comfortable and he whispered
yes, and he whispered more
but his words drifted off into air
then a violent man broke in
we struggled in silence
but he was stronger than I

Someone prays who has no prayer
and no one, neither onegod nor beast
nor iconic beast to whom to pray,
someone summoned to withstand
as if before she would assist the supplicant
the sorceress wanted first to test this container
this just me, child playing world
under a cardtable covered with a blanket,
taste metallic, fearing that in within
is the ring of fools, slight-of-hand clowns
the mocking gypsy laugh, dread
of being self-duped into self-betrayal
removal from what causes pain
then resentment, remarks of spite
that bitter poisonous berry
the tongue rejects

Summoned by silence
into silence
– not the droning undersound of things
not the keening wind after sundown
wailing over the plains
silence
in which, during which
enduring which
you vanish from the seen
Simply to not know?
To be the question
wrapped in the cloak of oneself
unvoweled, emptied
– how hard when renewal came
only when words came!
at noon
glitter on snowcrust
in neither season

Timelessness
fills me with confusion
I sit in darkness my brain hurting
with the torn, wrenched cries
of my daughter who is
tormented by an unimaginable cruelty
probing her son like a hot knife
and I can do nothing, the mother
who fails the mother
as the Comforter, Abiding One
fails us
There is another (I have heard)
who is not mother
who possesses an earthly light
How do I make myself
strong enough to contain
her, and not be shattered
beyond self recognition?
Surely that is why I have
found myself in this desolate
hope-ridden state
To wait in the stillness,
an act so very like
my mother’s – exorbitant
severe, who only once
let me see her cry