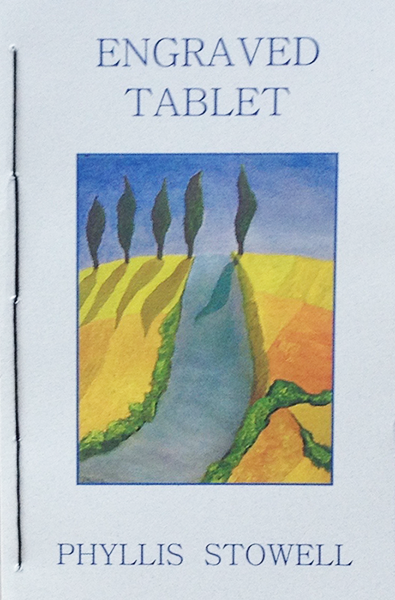 Readers of Phyllis Stowell’s poetry know her for her courageous and often starling explorations of the unconscious.  In these poems, however, her numinous awareness has been directed, with increasing clarity, to visions of the external world.  In Engraved Tablet, with some of her finest published work to date, she is centrally focused on the landscapes of a small painter-frequented Mediterranean port, with a compellingly direct and deeply personal voice.  Reflecting the mature craft of a lifetime, these poems are memorable not just for what is said, but for what lies behind them.

Yes, it is charming, doux.
Fronds of palm fanning, almost fanning
two urns at the entrance
of a small sand-colored villa
basking cat-like in January light.
Nothing is agitated, nothing visible
is black. Even clouds
drift muted as haze. Through greenery
patches of dull rouge tile and below
dormant vines stitched into a garden wall
like an Etruscan script.

Provence — I watch it: what can it say
to a stranger, an American who has
brief history? Across the parking lot
a widow in a plum robe is dusting
an antique coffeetable. Yesterday
she stood a long time at the window.
Perhaps I have lived too urgently,
life a fleeing woman I pursued
but could never touch. Perhaps
beauty and placidity
are not the sleep of innocence
who looks so much like a dead child
carved on a brocaded pillow of stone.

But it’s remarkable! So the man tells a story
to preserve himself against steadfast ruin: his hike to the site
under noon’s relentless pressure, a xenophobic bus driver
having dropped them like turds, his luggage-carrier wheels
jarring, slipping on the unmeasured mile of loose gravel in 100° heat,
his exhausted humble sigh at the sudden sight of festive blue –
umbrellas! Tomatoes Olives Feta. How good to eat, how good
to rest. . . then one of the lesser seraphim, a crabbed servant
bent over with complaint, leading up and up limestone ledge steps
to the uppermost shelter, almost cool inside.

How good to lie down inhaling air pure as the mountain.
To join near nightfall the audience before they were an audience,
drinking, eating pizza, passing words around, as if on a platter.
To enter another theater just as the ebullient director with flaring
white hair, wearing pantaloons, arrives beside his ballerina-like wife,
his precocious daughter. To watch, on this stage of sand,
wearing a mask with rouge-dot cheeks, silly bulbous breasts,
her cause serious, its cause obscene — Lysistrata.

Afterwards, unready for sleep
he stepped outside his stone bedroom
to look up. Crazed bats tore through a floodlight
but beyond, above: Plato’s stars
his stars! — so large, so close
it was as if nothing had happened.